Imagine that you are the last of your kind, you have been bred for combat, built for war and you master any kind of weapon, pilot any vehicle and fear no enemy. That's the way you'll feel playing Halo. Halo is a successful game that will hook you. It's more than a classic shooter.

You Can't Say you don't like Halo. Even if you claim to dislike it, I know that somewhere deep down in your soul there's a little gravelly voice cheering its sticky plasma grenades, fun little vehicles and relatively unique take on combat You've had some good times with Master Chief, whether sitting on the floor in front of an Xbox with a mate or perhaps even with Gearbox's PC version of times past. I know that a fire has been lit somewhere deep in your heart - so take hold of my hand, look deep into my eyes and join me in exhaling a smidgen of that green metallic love.

Something you can say, though, is that there was no need to keep the PC community waiting three long years for a conversion. A conversion too that now appears dull and ageing, and what's more can only be run on a Vista platform bereft of anything else worth playing apart from Geometry Wars. That is, at least until the advent of DX10 and the whine of a million gamers opening their wallets and pouring coins into the cavernous maw of Bill Gates.But whatever you think about Vista, and whether you consider MS a risen messiah or a ruthless hijacker of fun, I think that while we're still holding hands (and we are still holding hands), we can all agree that releasing the ancient Halo 2 as a flagship title for both Vista and Games for Windows LIVE is a f***ing stupid idea.

The bare bones of Halo 2 are great - its shooty, hidey gameplay, amusing physics and some genuinely excellent set-pieces (notably jumping onboard the giant spider mech in an otherwise barren attack on Earth) still get the adrenalin pumping. But due to the 'OMG - online multiplayer on Xbox! This is the future!' effect of its original launch, people tend to forget its multitude of sins.The dull, obtuse and nonsensical storyline (the low point of which is a Flood hive mind ripped straight from Little Shop Of Horrors), the sudden ending, the cop-out that was the Earth invasion, the crap bits where you play as an alien Arbiter, the endless retread of gameplay already done to death in the original.. All getting in the way of action you can't help but feel affection for despite it all. 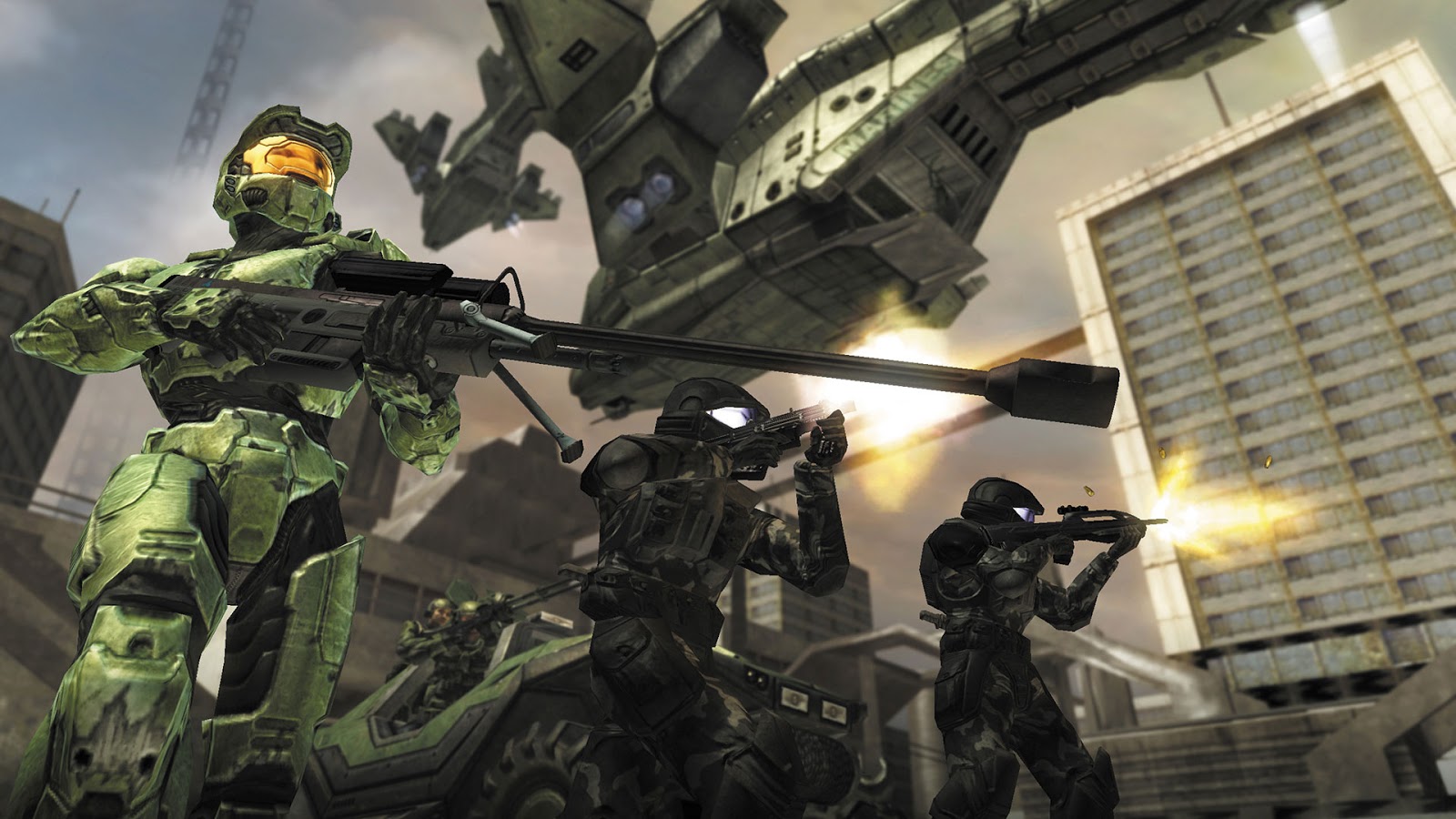 Multiplayer is what sealed the deal with the living-room format, and all the old arenas and downloadable content resurface here -ready, willing and able for you to strap yourself into MS's bulky LIVE system and an undeniably giggle-packed game, despite a marked variation in quality as you pass between the 23 maps.The two new maps on offer (Uplift and District) are pretty intense - but, I'm sorry, if there are redeeming features in that one with the giant turbine that every bugger plays, then I've yet to find them. As for the persistent lack of co-op play on PC, well, that's just as unforgivable as it was last time around. Oh, and the menu systems pissed me off too - MS still seem convinced that everyone will be playing with one of their pads, and to get my mouse inverted (yes, I know), I had to traverse seven screens, which may not sound like much, but felt like I was ascending Kilimanjaro.

As for the graphics, well, I can't deny they're far crisper and cleaner than the Xbox version (you can increase the resolution and everything), but that doesn't stop them looking dated. I've always really liked the character models of the Halo menagerie, but even so, everything seems flat and lifeless compared to the efforts of every other shooter on the market.

Xrikey. What a kicking. Despite all this, though, what Halo boils down to - the same 30 seconds of decent action, repeated ad infinitum - is, while sometimes too repetitive, still great fun. Interiors are drab and lifeless, exteriors are often starkly beautiful; you shoot you jump, you hide, you win, you lose, you die, you laugh, you live once more.

The Halo template is not broken - but shell out cash for this and your spirits sure will be. You'll have fun, it'll make you smile, I won't deny it. But three years on, the Halo 2 Vista experience is as forgettable as it is tardy and somewhat depressing.